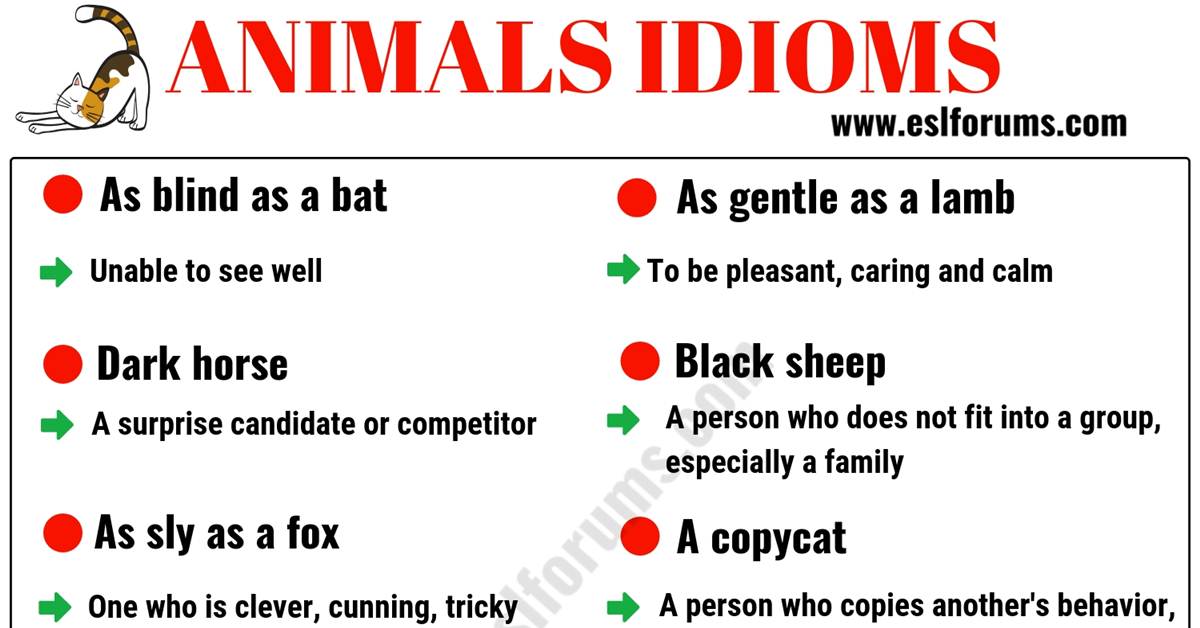 Following is a list of 10 commonly used animal idioms in English you should learn. Each idiom includes meaning and example sentence to help you understand clearly about it.

List of animal idioms with use explanation and example.

As blind as a bat

Meaning: Technically speaking, bats are not blind but do have relatively poor eyesight. The myth probably originated from the fact that they dart around and often seem unaware. Bats navigate using their ears and emit high pitched sounds that cannot be heard by humans. The sound hits objects and travels back. This is known as a solar system.

As gentle as a lamb

Meaning: Lambs are known to be amongst the gentlest animals and this idiom is based on the same.

Meaning: The origin of this idiom is unclear but it is used to warn someone against being too curious as this can cause harm.

Straight from the horse’s mouth

Meaning: In the betting circle, a lot of money is placed on the horse that is likely to win. This information is procured from those working with the horses. The phrase ‘straight from the horse’s mouth indicates information that is obtained from the best possible authority on the matter.

As sly as a fox

Meaning: The fox is considered to be a very cunning and deceptive animal and the phrase is derived from the same.

Meaning: Kittens are known to copy their mothers in an almost identical fashion. The phrase is derived from this tendency and is often used to refer to the human tendency to duplicate.

Let the cat out of the bag

Meaning: The origin for the same is complicated. The phrase is used to ‘disclose a secret’.

Meaning: The phrase originates from the long drawn enmity between cats and dogs as is used to suggest a confrontation between two people.

To kill two birds with one stone

Meaning: A slingshot is often used to hunt birds, and to kill a bird with it is considered a difficult task. To be able to kill two with the same stone would require extraordinary, unparalleled skill. To kill two birds with one stone denotes the accomplishment of two tasks with a single effort.

Meaning: The origin of this idiom lies in the excitement that a dog displays when it smells a rat and then tries to kill it. It is now used to convey a feeling of suspicion regarding someone. 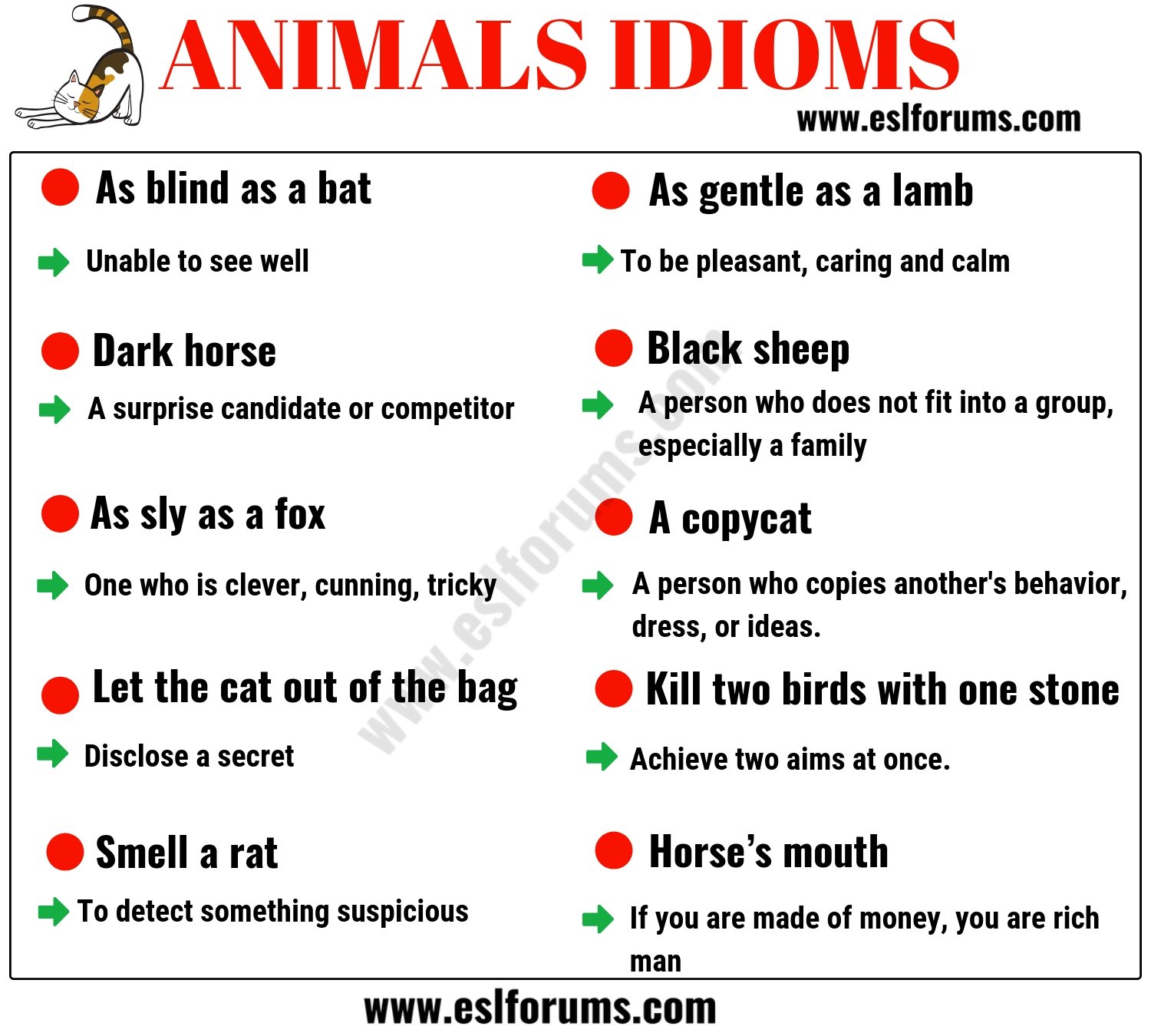 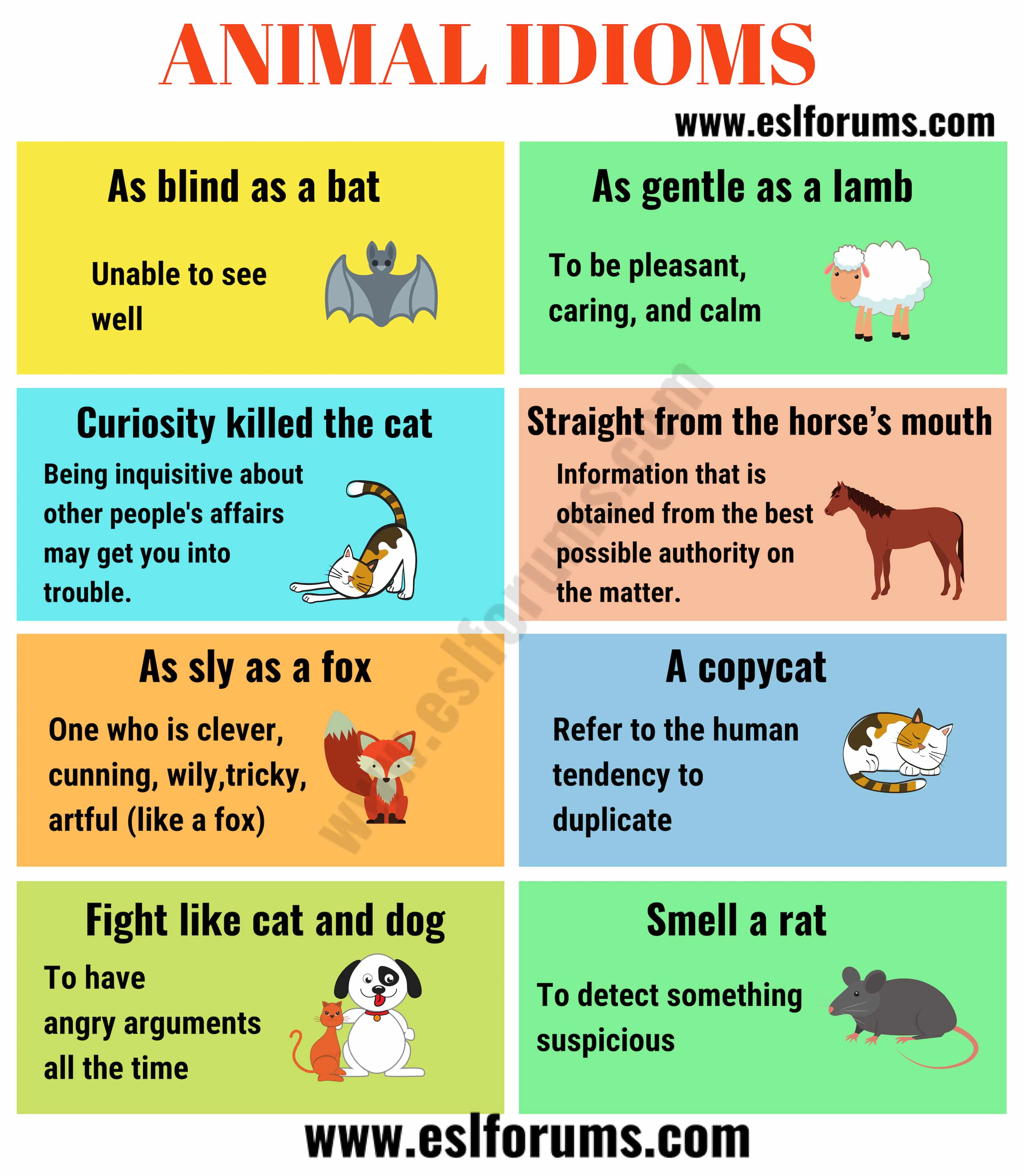 Hello thanks for all things you published . I’m very interested in following and reading this page. thanks agan .????

i love this because
i can do my home work know thank!