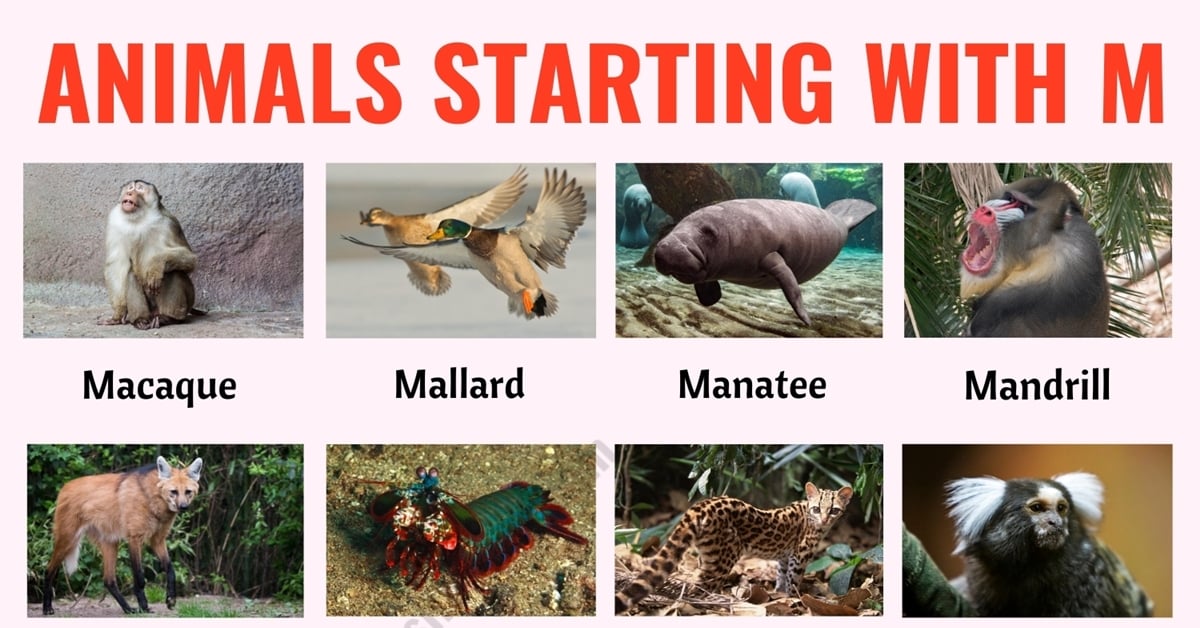 Animals that Start with M! In this lesson, you will learn a list of animal names that start with M in English with ESL picture and example sentences to help you enhance your vocabulary words.

Animals that Start with M

Animals that Start with M with Examples

Learn the list of animal names that start with M in English with examples.

Do not tease roaming dogs and macaque.

A mallard suddenly took wing, rising steeply into the air with an angry squawk.

The maned wolf looked around for a second and moved on.

In Japanese cuisine, the mantis shrimp is eaten boiled as sashimi and as a sushi topping and is called shako.

Scientists have developed the common marmoset monkey as a new animal model for Lassa fever research.

The martial eagle is a large eagle native to sub-Saharan Africa.

Meerkat babies may be the most adorable creatures in southern Africa, but their colony mates manage to stop spoiling them after only a few months.

Brachypelma hamorii is a species of tarantula found in Mexico. It has been confused with B. smithi; both have been called Mexican redknee tarantulas.

The millipede shooed away the crowd.

Both the caterpillar and adult of the monarch butterfly are distasteful to their enemies.

Dad, the mongoose got in the garbage again!

I have tasted moose meat, though.

Mountain gorillas are an endangered species.

The mountains have brought forth a mouse.

In order to hand-rear the chick, keepers used a homemade glove puppet to mimic an adult macaroni penguin.

Up in a nearby tree, a magpie chattered at her.

The previous record-holder was also a Maine Coon cat.

The Malayan civet, also known as the Malay civet and Oriental civet, is a viverrid native to the Malay Peninsula and the islands of Sumatra, Bangka, Borneo, the Riau Archipelago, and the Philippines.

I got to pet a small manta ray at the aquarium.

The markhor (Capra falconeri), is a large Capra species native to Central Asia, Karakoram and the Himalayas.

Once mayfly larvae are found, they will be removed.

The mole bored its way underground.

Must be an escape from a zoo, he thought, just as mink could be from fur farms.

Moorhens, wrens and woodpeckers all include species that, in some circumstances, behave in this way.

I saw a little glazed brown ring of tent caterpillar moth eggs on a chokecherry twig.

Animals that Start with M Infographic