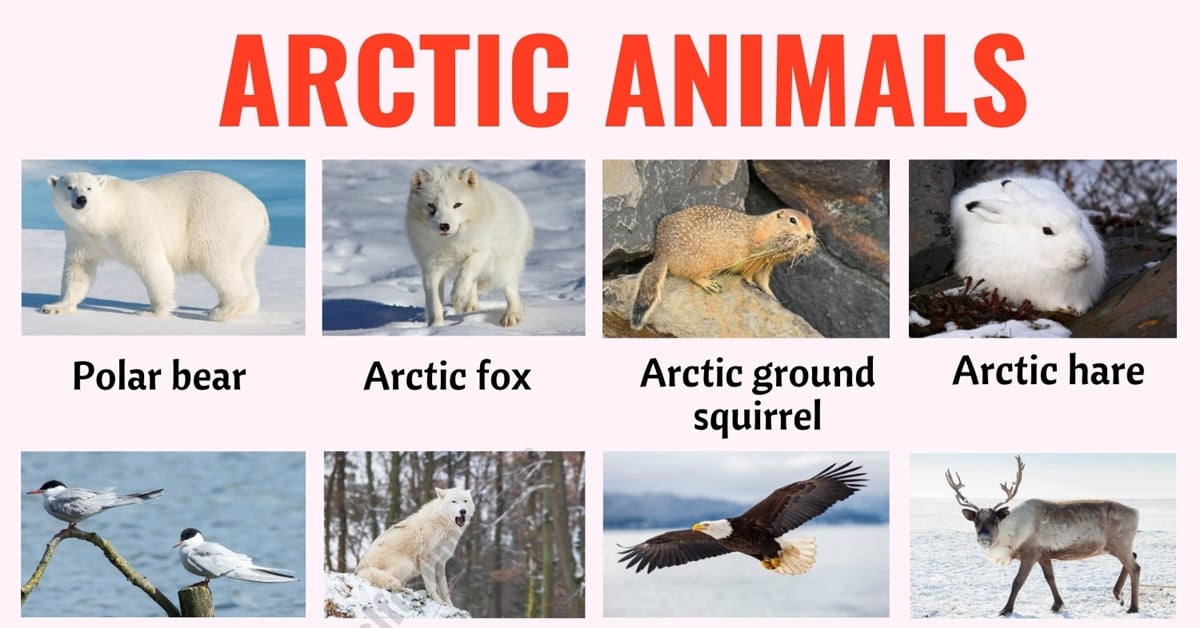 Arctic Animals! In this article, you will learn a list of common arctic animals in English with ESL picture and example sentences to help you enhance your vocabulary words.

Learn the list of arctic animals in English with example sentences.

The polar region is the habitat of the polar bear.

The whiteness of polar bears and arctic foxes provides camouflage.

An arctic tern on its way from Tierra del Fuego to Alaska, for instance, will ignore a nice smelly herring offered from a bird-watcher’s boat in Monterey Bay.

Its carcass is eaten by a bald eagle, whose gut becomes lined with oil.

Father Christmas travels in a sleigh pulled by reindeer.

The three species are the snowy owl, spotted eagle owl, and the great grey owl.

Muskox lives in the frozen Arctic and roams the tundra in search of the roots, mosses, and lichens that sustain them.

These include the grizzly bear, cougar, wolverine, wolf, coyote, and bald and golden eagles.

The arctic fox (Alopex lagopus) is well suited for frigid weather, from its short muzzle and ears to its furry soled paws and thick, bushy tail.

The snow goose flew down low over the field and then soared back up gracefully.

Something mysterious is happening to one of the Island’s best-loved inhabitants – the Atlantic puffin.

The most extreme death, however, was caused by blood loss after a swarm of mosquitoes attacked a thick-billed murre.

The parasitic jaeger, also known as the Arctic skua, Arctic jaeger or parasitic skua, is a seabird in the skua family Stercorariidae.

The rock ptarmigan (Lagopus muta) is a medium-sized gamebird in the grouse family.

The little auk or dovekie is a small auk, the only member of the genus Alle.

Uria is a genus of seabirds in the auk family known in Britain as guillemots, in most of North America as murres, and in Newfoundland and Labrador as turr.

Unlike most other European auks the black guillemot is typically found in ones and twos, scattered around rocky islets.

The earless seals, phocids or true seals are one of the three main groups of mammals within the seal lineage, Pinnipedia.

The feather trade in great auks, eider, and other sea birds has been mentioned earlier.

The glaucous gull is a large gull, the second-largest gull in the world.

The crested auklet is a small seabird of the family Alcidae, distributed throughout the northern Pacific and the Bering Sea.

Then he took off in fast flight, and l saw him in the vigorous chase after a snowshoe hare.

The ivory gull often follows polar bears to feed on the remains of seal kills.

I suppress an evil wish that an orca will be drawn in by this moving lunchbox of an animal.

The walrus followed us into the shallows, and we hurriedly jumped out on to the shore to get better pictures.

A beluga whale swims in a tank at the Vancouver Aquarium.

Kittiwakes, seagulls that normally nest on cliffs, are now installed as regular guests on a warehouse ledge.

As the horns on this male Dall sheep grow, they curve forward and upward.

Great place to learn about arctic animals and what they look like.

I love arctic, here’s a lot of good informations about arctic animals! Good points for making my own project.