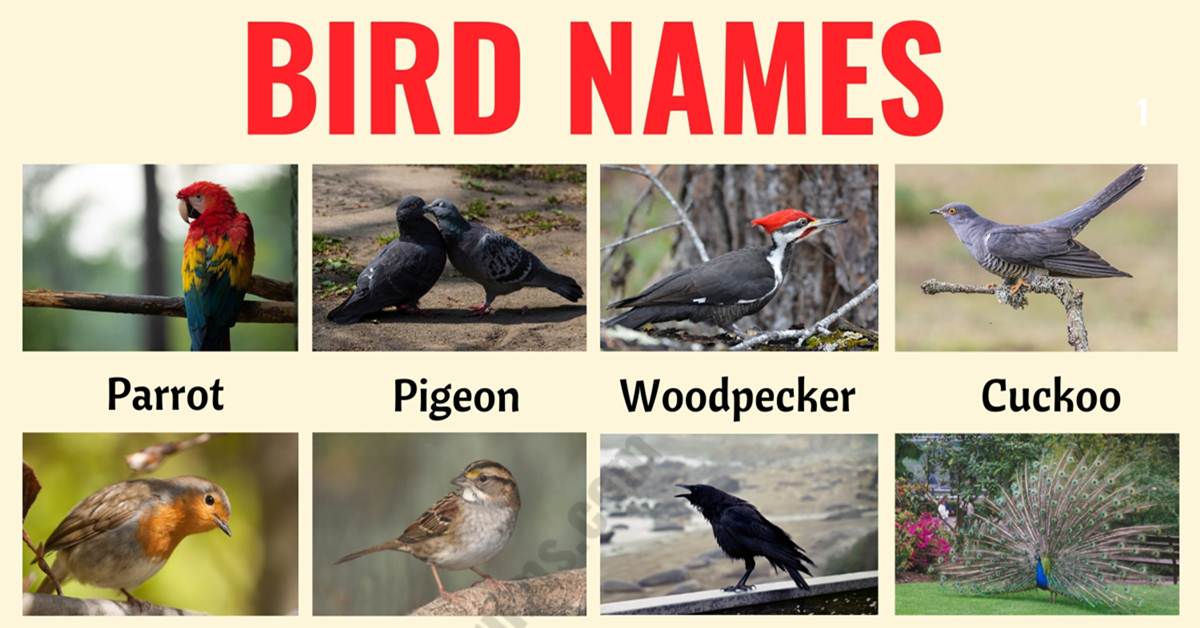 Bird Names! Animals names! In this lesson, you will learn a different types of birds in English with ESL picture and example sentences to enlarge your vocabulary.

Types of Birds with Examples

Bird names in the sentences.

A parrot can sometimes make you embarrassed.

A pigeon strutted along the roof, cooing rhythmically.

The woodpecker pecked a hole in the tree.

The cuckoo lays her egg in another bird’s nest

A robin was pecking at crumbs on the ground.

The sparrow has a worm in its beak.

A crow is never the whiter for washing herself often.

The peacock has fair feathers, but foul feet.

A hawk hovered in the blue sky.

Yeah, and you can still see a bald eagle at the Desert Museum.

Bring up a raven and he’ll pick out your eyes

One swallow does not make a summer.

The dove is an emblem of peace.

The owl seems to have deserted its nest.

A hummingbird, taking advantage of the dying minutes of daylight, feeds on flower nectar in the fragrant garden.

Frigatebirds are a family of seabirds called Fregatidae which are found across all tropical and subtropical oceans.

Purple sandpipers arc the most self-effacing of birds.

The Pelecaniformes are an order of medium-sized and large waterbirds found worldwide.

The turkey is basted to keep it from drying out.

A flamingo was etched on his shirt.

A goose was hatched among ducks.

The swan flapped its wings noisily.

The stork is starting to move.

The penguin is a flightless bird.

. Rare species like the roseate tern, which breeds on our rocky islands, are severely threatened in their wintering areas.

Most confusingly named as it is a stork not an ibis.

Hornbills are big and demanding birds that need plenty of space, which is something most zoos don’t have.