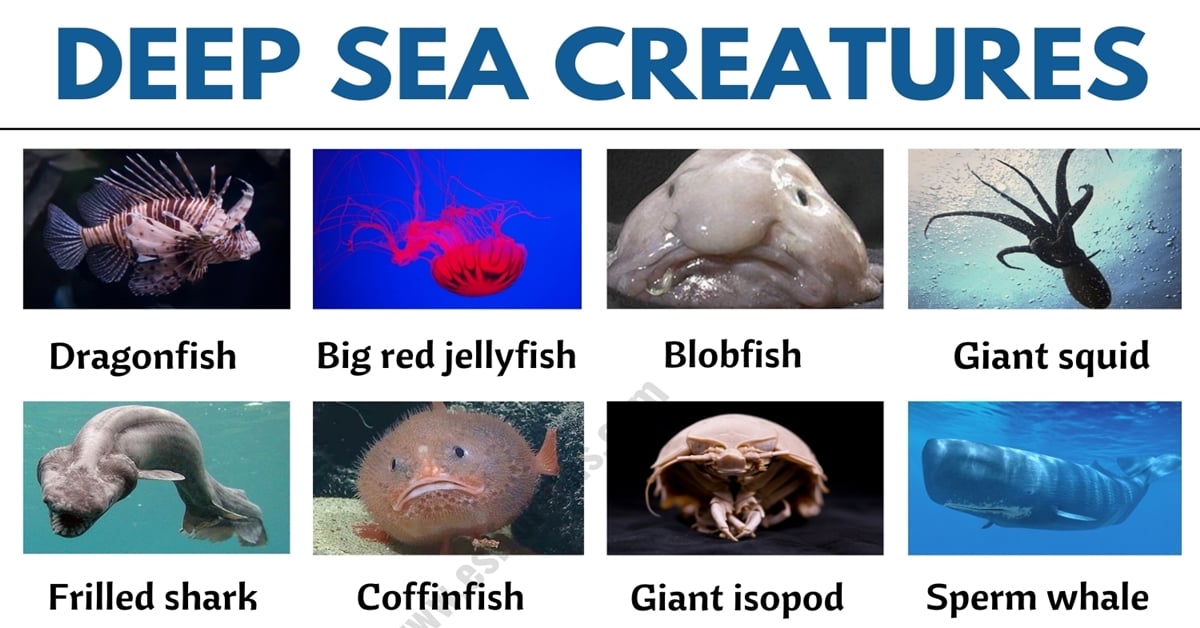 Deep-Sea Creatures! It’s interesting to discover the deep ocean. In this lesson, you will learn a list of names of deep sea creatures in English with ESL picture and example sentences.

Dragonfish, also called sea moth, any of about five species of small marine fishes comprising the family Pegasidae and the order Pegasiformes.

Tiburonia granrojo or Big Red Jellyfish is one of the largest sea jellies and unusual in a number of ways. T

It is a giant squid, its long tentacles twisting about like huge snakes.

The stargazers are a family, Uranoscopidae, of perciform fish that have eyes on top of their heads (hence the name).

The Pacific viperfish has jagged, needlelike teeth so outsized it can’t close its mouth.

The Pacific Ocean Hagfish has a disgusting way of defending itself.

Lanternfishes are small mesopelagic fish of the large family Myctophidae.

The bluntnose sixgill shark, often simply called the cow shark, is the largest hexanchoid shark, growing to 20 ft in length.

Have you ever tasted octopus?

The dolphin had become entangled in/with the fishing nets.

The greatest threat to humans comes from the stingrays, large flatfish that lie inconspicuously on the seabed in shallow waters.

Chimaera is closely related to sharks, skates and rays.

Endemic to the waters off south and east Australia, leafy sea dragons are closely related to seahorses and pipefish.

The chambered nautilus, Nautilus pompilius, also called the pearly nautilus, is the best-known species of nautilus.

Pigfish are characterized by irregular barring on the cheeks, a mottled appearance, or indistinct, irregular vertical bars.

Related to shrimp and crabs, the giant isopod is a deep-sea crustacean that makes its home on the ocean floor.

The great hammerhead is the largest species of hammerhead shark, belonging to the family Sphyrnidae, attaining an average length of 4.6 m and reaching a maximum length of 6.1 m.

The stargazers are a family, Uranoscopidae, of perciform fish that have eyes on top of their heads.

Amphipods range in size from 1 to 340 millimetres and are mostly detritivores or scavengers.

Grimpoteuthis is a genus of pelagic umbrella octopuses known as the dumbo octopuses.

Barreleyes typically live near the depth where sunlight from the surface fades to complete blackness.

Blue-ringed octopuses, comprising the genus Hapalochlaena, are four highly venomous species of octopus that are found in tide pools and coral reefs in the Pacific and Indian oceans, from Japan to Australia.

I really liked this page although there are some common things that should be replaced with new discoverys and non-common animals.

this is the best whhoooooo