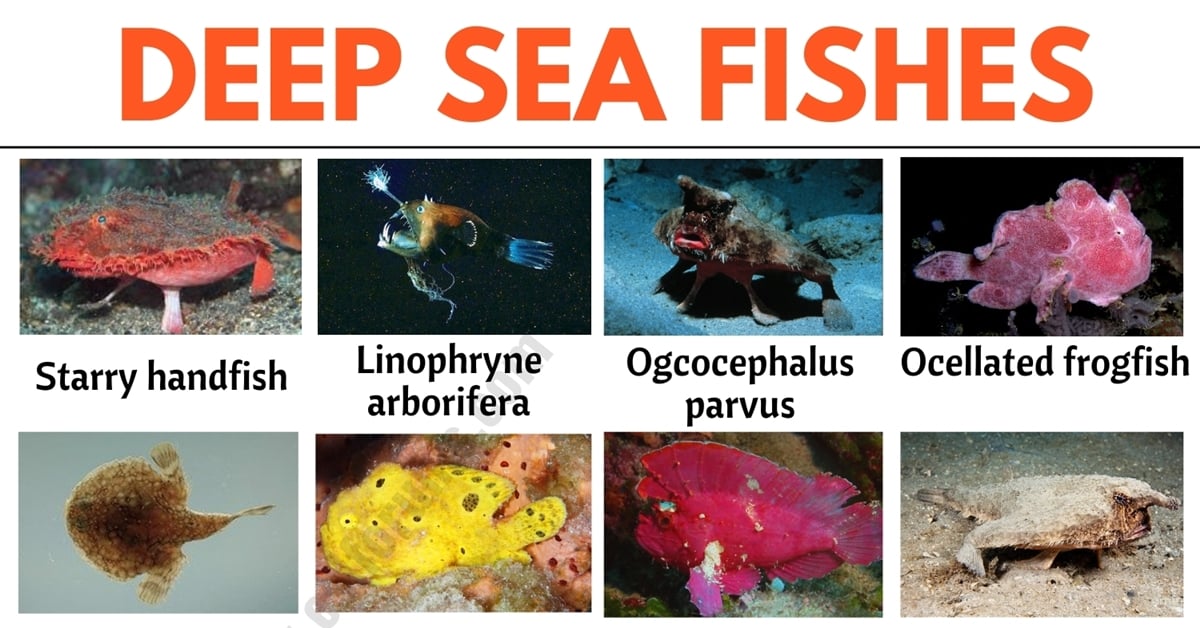 Deep Sea Fish! Do you know what types of fishes that live in the deep sea? In this article, we will learn a list of deep sea fishes in English with ESL picture and example sentences to help you enhance your vocabulary words.

Learn the names of deep sea fish in English with example sentences.

The starry handfish, Halieutaea stellata, is a batfish of the family Ogcocephalidae found on the continental shelves of the Indo-Pacific oceans at depths of between 50 and 400 m.

Linophryne arborifera, or illuminated netdevil, is an anglerfish of the family Linophrynidae, found in all tropical and subtropical oceans at depths below 1,000 m in the Bathyal zone.

Ogcocephalus parvus, the roughback batfish, is a species of batfish found along the coast of the western Atlantic Ocean from North Carolina in the United States to Brazil.

The ocellated frogfish, Fowlerichthys ocellatus, is a frogfish of the family Antennariidae, found in the western Atlantic including the eastern portion of the Gulf of Mexico, and the Caribbean Sea, to depths of 150 m.

The Shortnose Batfish is found in the Western Atlantic, Caribbean region growing up to 38cm in length.

The prickly anglerfish is a footballfish of the family Himantolophidae, found around the world in the southern oceans, in deep water.

A viperfish is any species of marine fish in the genus Chauliodus.

Lanternfishes are small mesopelagic fish of the large family Myctophidae.

Chimaera is the type genus of the cartilaginous fish family Chimaeridae.

The anglerfish is a fish of the teleost order Lophiiformes.

The leafy seadragon or Glauert’s seadragon, Phycodurus eques, is a marine fish in the family Syngnathidae, which includes seadragons, pipefish, and seahorses.

Barreleyes typically live near the depth where sunlight from the surface fades to complete blackness.

The great hammerhead (Sphyrna mokarran) is the largest species of hammerhead shark, belonging to the family Sphyrnidae, attaining an average length of 4.6 m (15 ft) and reaching a maximum length of 6.1 m (20 ft).

The stargazers are a family, Uranoscopidae, of perciform fish that have eyes on top of their heads (hence the name).

Amphipoda is an order of malacostracan crustaceans with no carapace and generally with laterally compressed bodies.

The cookiecutter shark (Isistius brasiliensis), also called the cigar shark, is a species of small squaliform shark in the family Dalatiidae.

The black swallower, Chiasmodon niger, is a species of deep sea fish in the family Chiasmodontidae.

The Atlantic footballfish (Himantolophus groenlandicus), also known as the man-gobbler, is an anglerfish found in extreme depths of the ocean.

Lophiomus setigerus, the Blackmouth angler, is a species of goosefish found in the Indian and western Pacific Oceans where it occurs at depths of from 30 to 800 metres (98 to 2,625 ft).

The red-lipped batfish or Galapagos batfish is a fish of unusual morphology found around the Galapagos Islands and off Peru at depths of 3 to 76 m.

The hairy frogfish is a type of fish that’s covered in spines.

Dragonfish, also called sea moth, any of about five species of small marine fishes comprising the family Pegasidae and the order Pegasiformes.

The sperm whale or cachalot (Physeter macrocephalus) is the largest of the toothed whales and the largest toothed predator.

The pigfish is a grunt fish in the family Haemulidae. This name derives from the grunting or chattering noise these fish make by rubbing their pharyngeal teeth together.

The redeye gaper, Chaunax stigmaeus, is a sedentary species of anglerfish in the family Chaunacidae.

Please note that sperm whales and amphipods are not fish