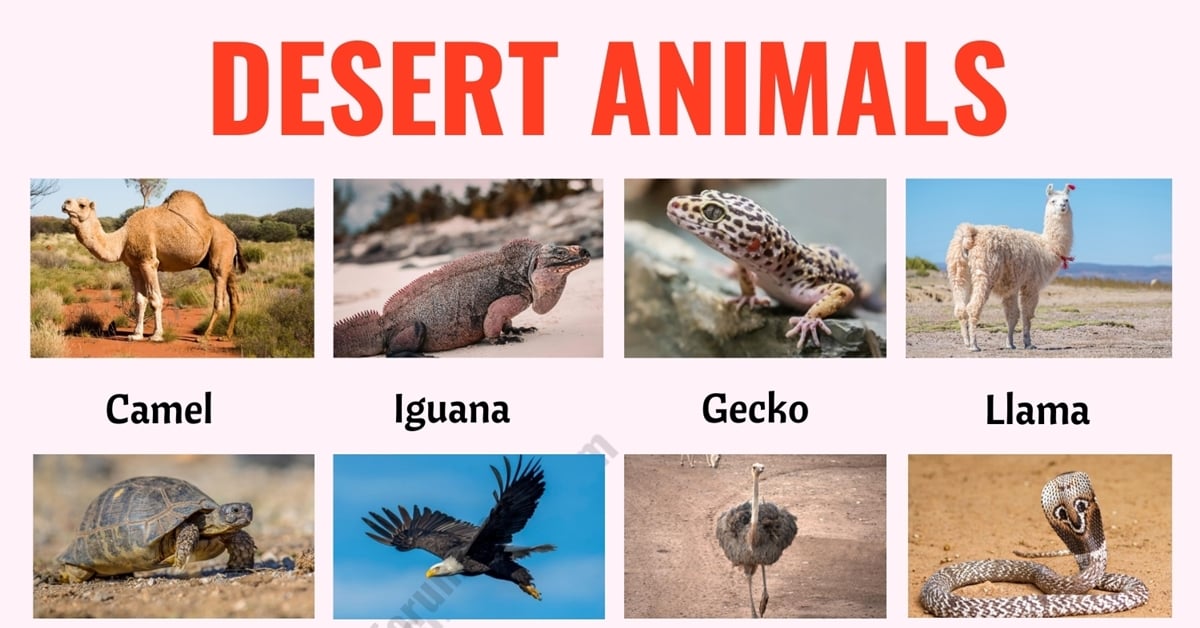 Desert Animals! In this lesson, you will learn a list of dessert animals in English with ESL picture and example sentences to help you enhance your vocabulary words.

Learn the list of animals that live in the desert in English with examples.

The addax antelope, also known as the white antelope and the screwhorn antelope, is an antelope of the genus Addax, that lives in the Sahara Desert.

The black widow spider has red-orange markings on its body.

When Americans say wildcat, they usually mean a lynx, an ocelot or a bobcat.

We padded the seat of the chair with camel hair to make it soft.

From his mouth crawled a long, dead centipede of dried blood.

The chameleon is able to change colour to protect itself.

I have never seen a coati before and luckily saw a family of them in the museum.

The cobra is one of the world’s deadliest snakes.

Some exceptions include the rattlesnake, coral snake, water moccasin and copperhead.

The coyote returned to the barn end and plopped down in front of the crowd of llamas.

The desert monitor, Varanus griseus, is a species of monitor lizards of the order Squamata found living throughout North Africa and Central and South Asia.

The eagle is the animal most sacred to the Native Americans.

The fennec fox (Vulpes zerda) is a small crepuscular fox native to the Sahara Desert and the Sinai Peninsula.

There is a gecko in the tree.

The gerbil is a playful little animal with big whiskers and a huge tail.

The Gila monster has to be reckoned among the world’s most poisonous creatures.

The iguana clings to the temple wall.

We spotted a jackrabbit hidden in the brush.

A young swift fox makes a dash for its den, a kangaroo rat clenched tightly in its teeth.

I built a small, mirrored box, and I bought a colour-changing lizard and placed it inside.

Promise just like llama, just as talking about it forever.

The lesser long-nosed bat is a medium-sized bat found in Central and North America.

For the meerkat family unable to leave the desert plains, life is now really tough.

Ostrich is the fastest animal on two legs

The peccary that was most commonly traded is a species in decline and the woolly monkey is threatened with extinction.

Another quail returned the call from somewhere in front.

The rattlesnake can see in the dark and makes no noise as it glides along.

The roadrunner pulled the string, and a whole bag of rocks fell upon the coyote.

If you let go a snake or a scorpion, you’re guilty of doing harm to your companion.

I bolt across the sheets legs first like a tarantula on the run.

The toad has a distinctive yellow stripe down its back.

The tortoise spends the winter months in hibernation.

The decline of the vulture is due to the success of livestock farming and loss of habitat.

A wolf spider treads perilously on the rim of a South American pitcher plant, perhaps looking to prey on insects drawn to the plant’s strong nectar scent.

African ground squirrels (genus Xerus) form a taxon of squirrels under the subfamily Xerinae. They are only found in Africa.

I kiiiiiinda looked up some of these pictures! Soo…

Why would I do that? Because I wanted to look up facts about it!