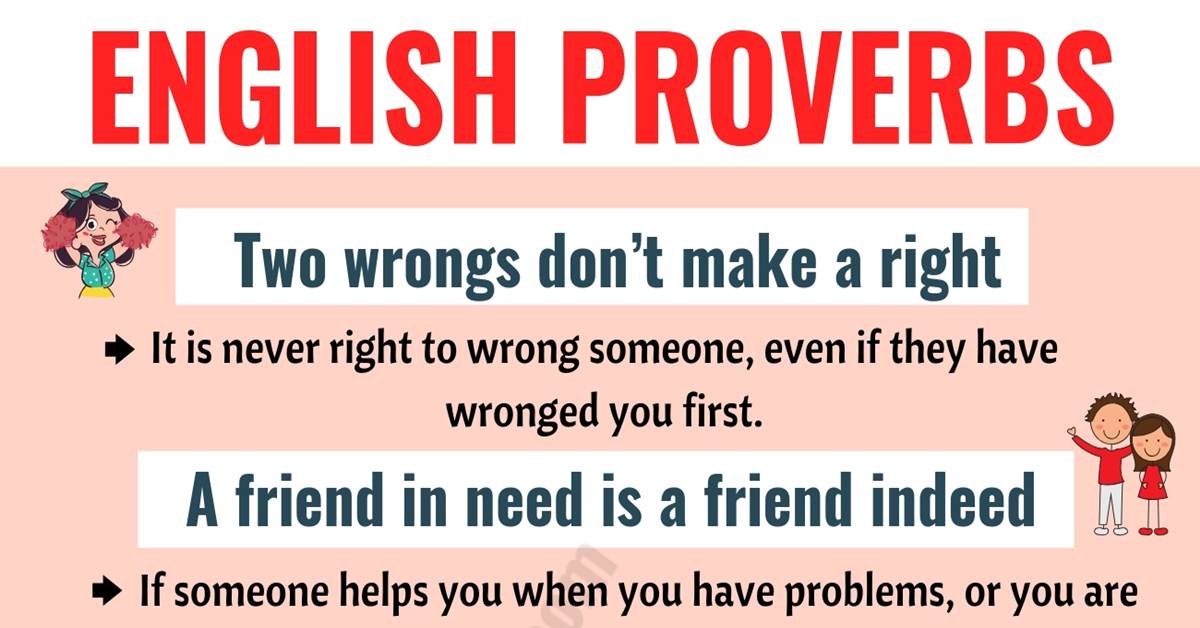 English Proverbs! Following is a list of 30 famous proverbs in English with their useful meanings you need to learn to master your English fluency.

Proverb is a simple, concrete, traditional saying that expresses a truth based on common sense or experience. Proverbs are often metaphorical and use formulaic language.

Meaning: It’s better if you do something later, than not do it at all.

Meaning:  If someone helps you when you have problems, or you are in trouble, that person is a true friend.

Meaning:  What you do matters – not what you say.

Meaning: Everyone has their own ideas of what is beautiful.

Meaning: You should always be careful, even if you think it’s not necessary.

Meaning: If you want to be perfect at something, you need to practice every day.

Meaning: When something, especially money, is easily got and then soon spent or lost. 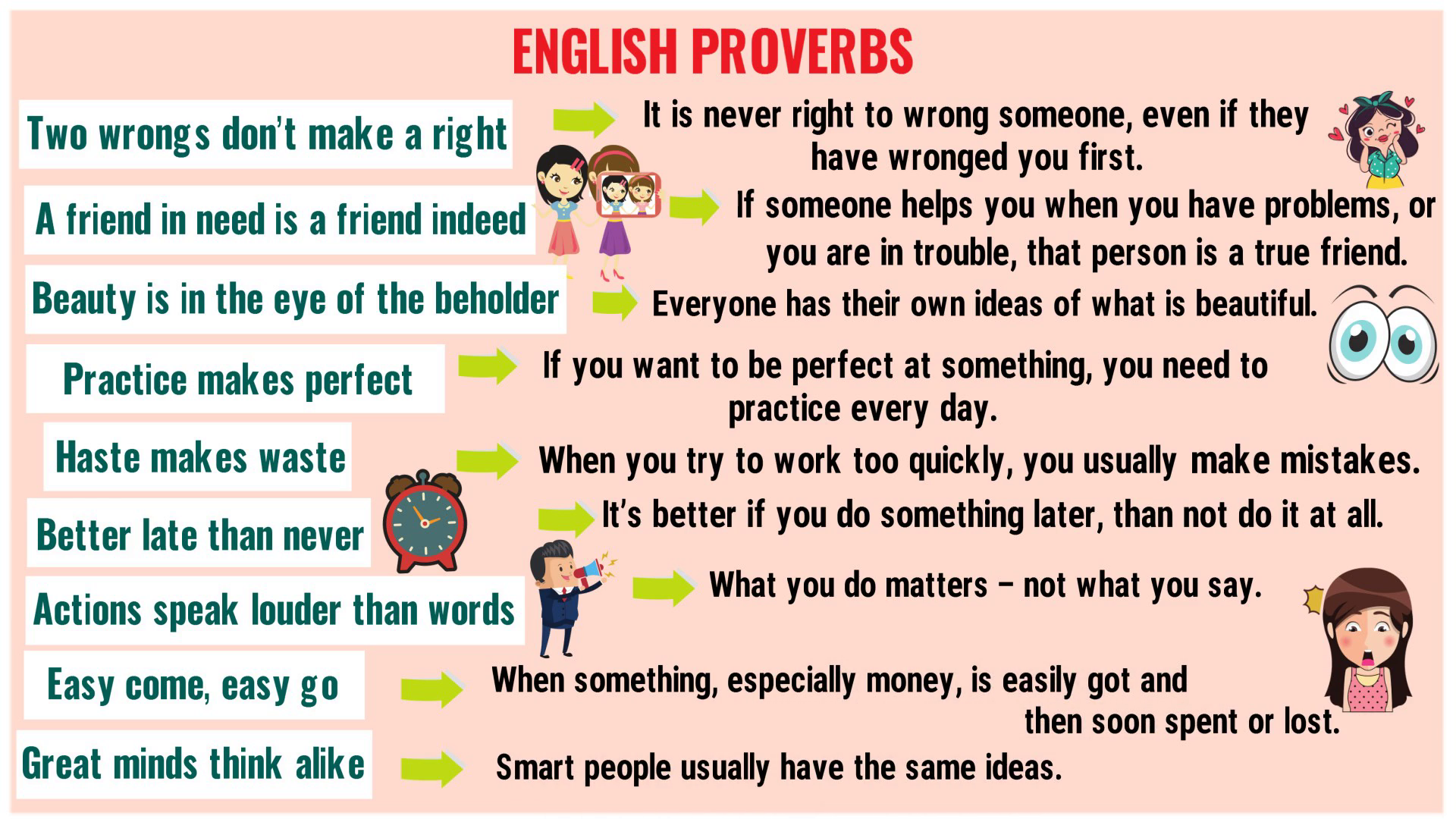 Meaning: When you are in another country, it’s better to behave like the citizens of this country.

Meaning: No matter what language you speak, a picture can tell you more in a few seconds than in the time spent reading a thousand words describing the same thing.

Meaning: Don’t brag about being able to do something, unless you actually know how to do it.

Meaning: Smart people usually have the same ideas. This proverb is used when someone has the same idea as you.

Meaning: When you try to work too quickly, you usually make mistakes.

Meaning: You have to act fast to get what you want.

Meaning: If you associate with bad or dishonest people, bad things will happen to you.

Meaning: It’s hard to change a decision, once you’ve made it.

Meaning: People who are unhappy want to make others unhappy too.

Meaning: Be patient. Do the things in their correct order.

Meaning: If you love someone, you don’t notice his or her faults. You think they’re perfect. 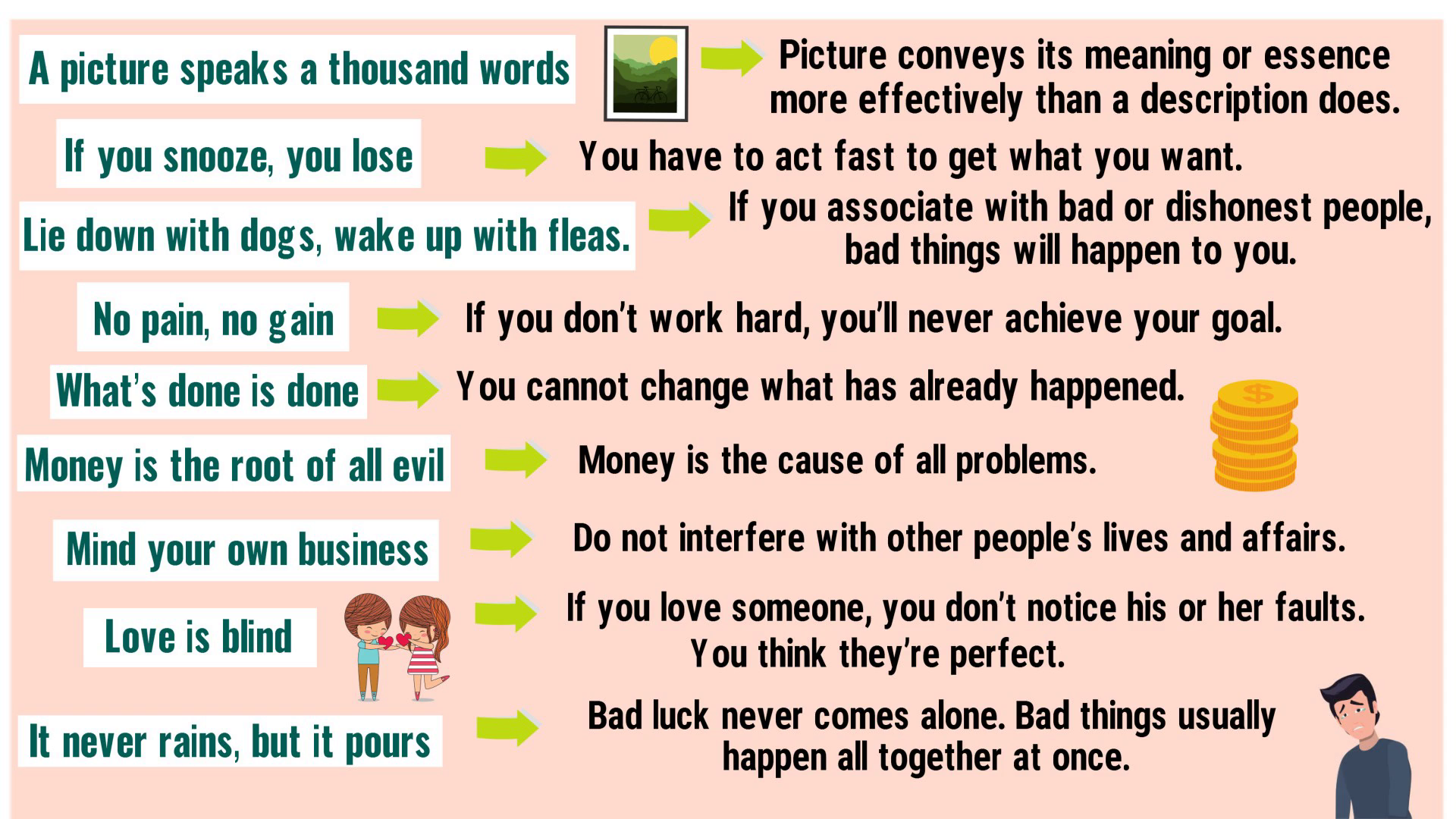 Meaning: Do not interfere with other people’s lives and affairs.

Meaning: Money is the cause of all problems.

Meaning: People don’t often believe something, unless they see it.

Meaning: The longer it takes to do something, the more costly it will be

Meaning: You cannot change what has already happened.

Meaning: If there are many people doing the same job, the result will come out to be bad.

Meaning: Don’t assume your plans will come to fruition. 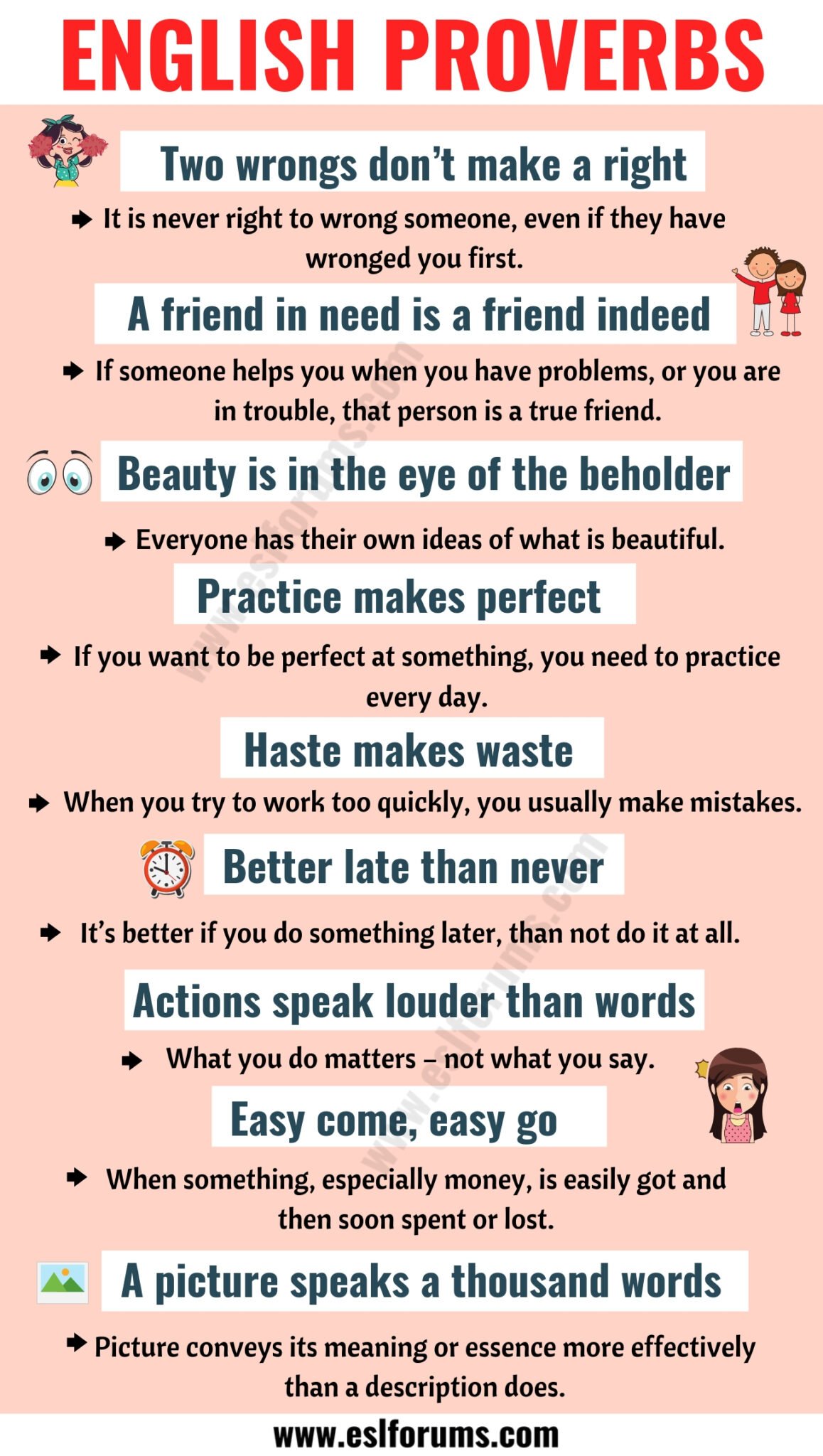 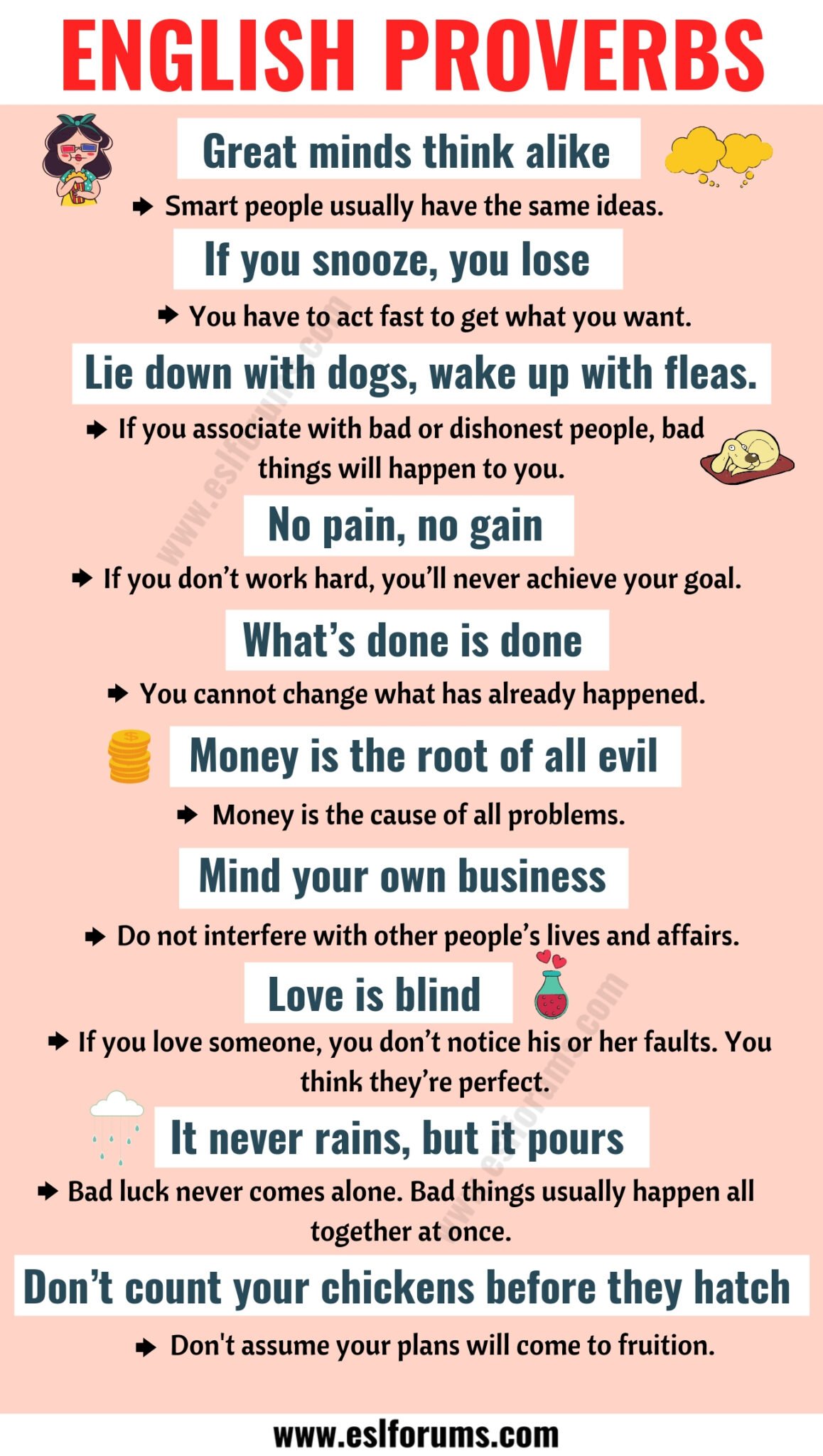 Really, this is a great website to improve the English language of us.

Hi there. Thanks a lot for how you prepared the proverbs. Please add other sayings.

😍🌈🦄…..Really great website to students improve the English language of us….🦄 😍🌈

It’s “the love of money is the root of all evil” and it’s from the Bible,.

the quote about money being the root of all evil is incorrect. It should be “the love of money” etc etc. See the change that makes?

there are 31 proverbs instead of 30

I love the way you guys explain the mean of each idiom. Thank you.

Your work on Idioms and proverbs is fabulous!

It is really good.

It is really very good