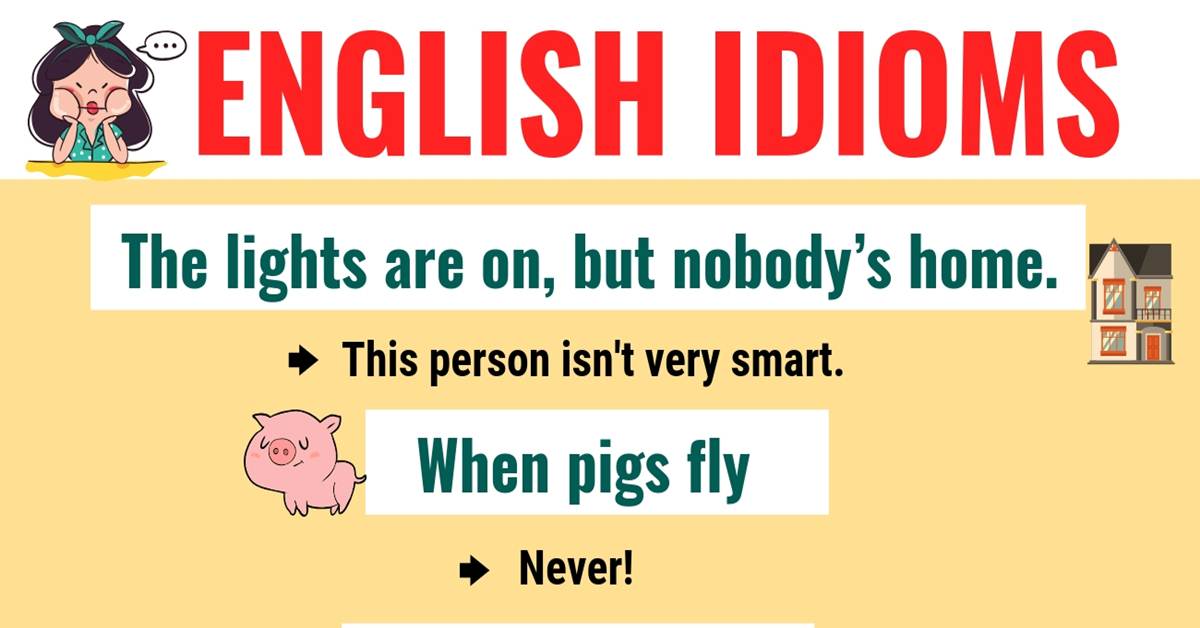 Funny Idioms! An idiom is an everyday figure of speech or metaphorical expression whose meaning cannot be taken literary. In this lesson, you will learn a list of Funny idioms in English you can use in your daily life.

1.The lights are on, but nobody’s home

Example: I didn’t know she is so stupid! The lights are on, but nobody’s home.

Example: Bill will give your books back when pigs fly, so forget about them.

Meaning: Imagine how pigs eat – they eat a lot, and they eat quickly, right? So this idiom in English means “to eat a lot at one time; to overeat.”

Example: She was pigging out on ice cream and sobbing when I came home.

4. As Cool As a Cucumber

Meaning: very calm, especially when this is surprising

Example: She walked in as cool as a cucumber, as if nothing had happened.

Example: Just hold your horses, Bill! Let’s think about this for a moment.

Meaning: a euphemism meaning “to die”

Example: Charlie finally kicked the bucket. He had cancer, you know.

7.  Everything but the kitchen sink

Meaning: This idiom in English means “everything that you can think of; every possible thing” in a given situation.

Example: He used to order everything but the kitchen sink when he went out to dinner and then pig out alone.

Meaning: This is a rather old (and outdated) idiom that means “be quiet; stop talking.” It is a rude way to tell someone to be quiet.

Example: You’ve been talking non-stop for an hour. Put a sock in it!

9. To have Van Gogh’s ear for music

10. To have a cast iron stomach

Meaning: able to eat anything without suffering bad consequences

Meaning: to habitually drink a lot of alcohol

Example: I don’t know what to do. For the past six months, he’s been drinking like a fish.

Meaning: A loaf is a quantity of bread that is shaped into a certain form and then baked. But in this idiom, the word “loaf” refers to a person’s head – in other words, the brain. So “use your loaf” means to use your brain; to think about something.

Example: Oh, Jim…When will you start to use your loaf, for God’s sake?

Meaning: so tasty you want to lick your fingers after eating

Example: You can tell her to clean her room until you are blue in the face, but she won’t do it.

Meaning: a lot of unnecessary anger and worry about a matter that is not important.

Example: My brother and sister had a big argument about the television yesterday, but it was just a storm in a teacup.

Meaning: And that’s all there is to it; there you have it

Example: Just tell them you’re a friend of mine and, Bob’s your uncle, you’ll get the job.

Meaning: living in a fantasy, dreaming.

Example: He’s not right for this role, he has his head in the clouds.

Example: The fox in the road was as dead as a doornail.

Meaning: something very easy to do.

Example: The test was a piece of cake.

Example: My heart’s in my mouth ever time it rings. 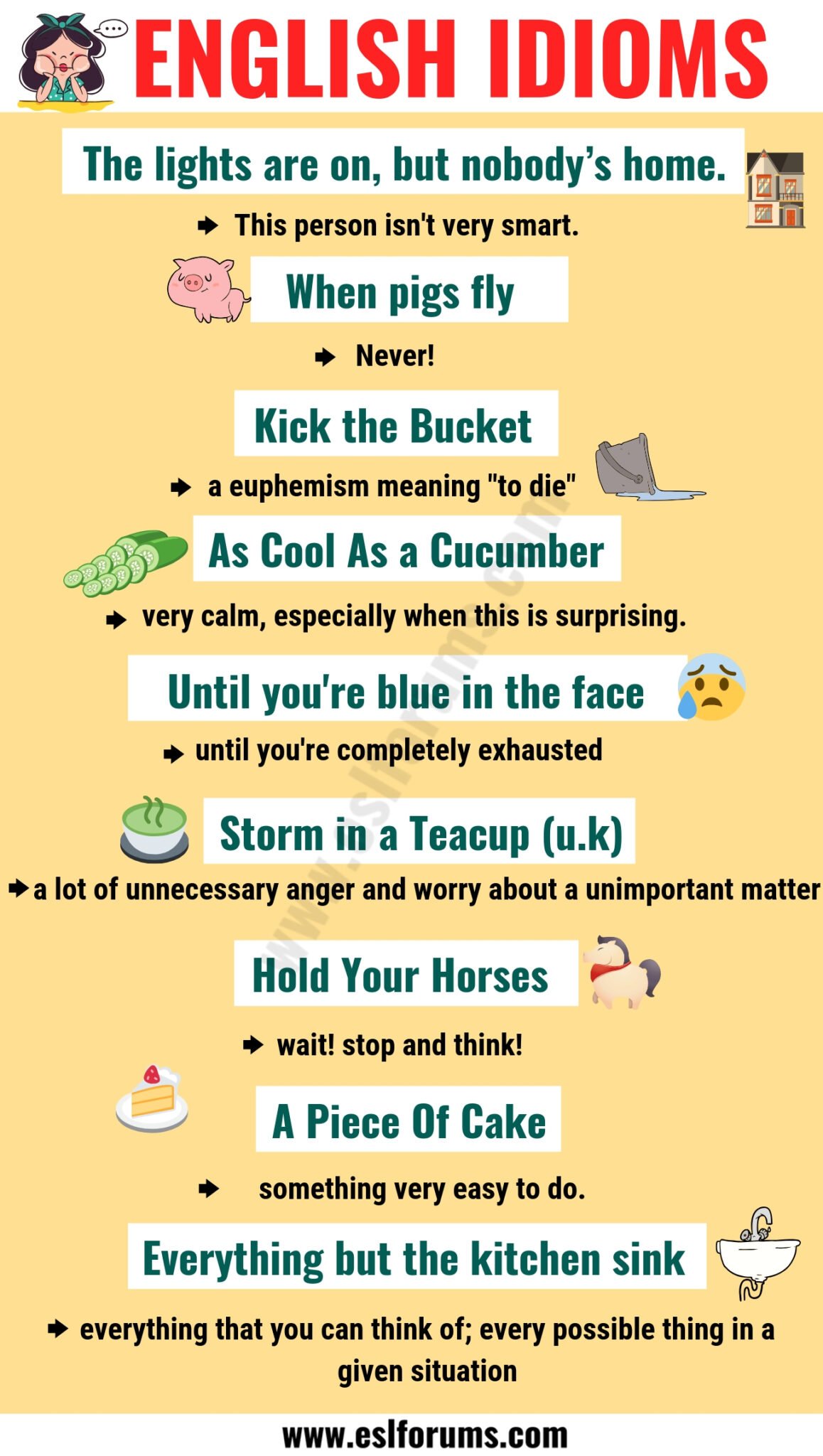 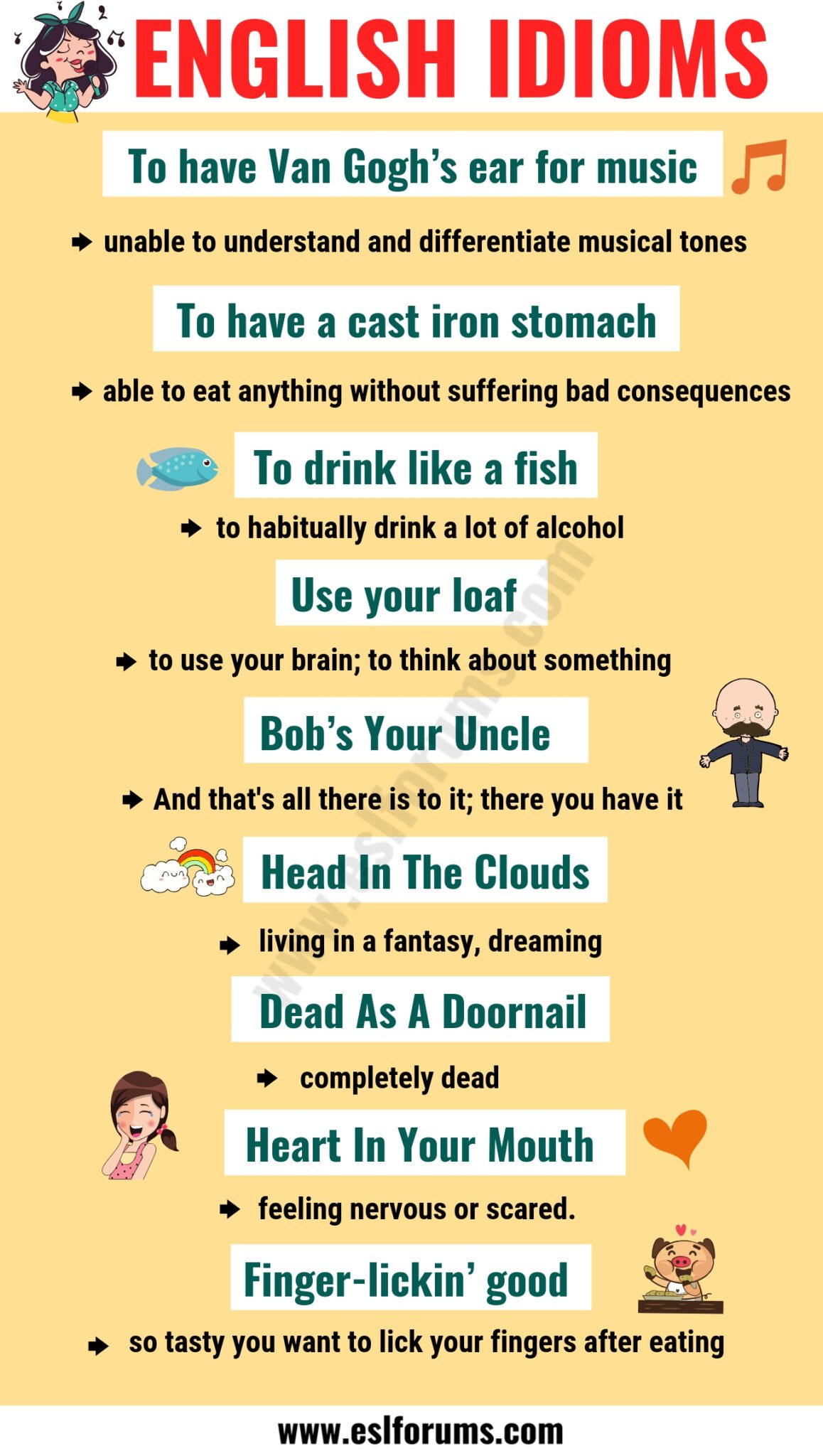 The origin of these idioms would be good to know. My students enjoy learning where these idioms come from and how they evolved

I LOVE THESE IDIOMS LIKE CRAZY AND I HOPE TO
RECEIVE MORE ARTICLES .

BOB’s my Uncle? have never heard this in the US in 60 years I have lived here. Where do they say this?

“The spectator sees more of the game” What does it mean?

I can’t find anything good for my school competition.😭😭😭