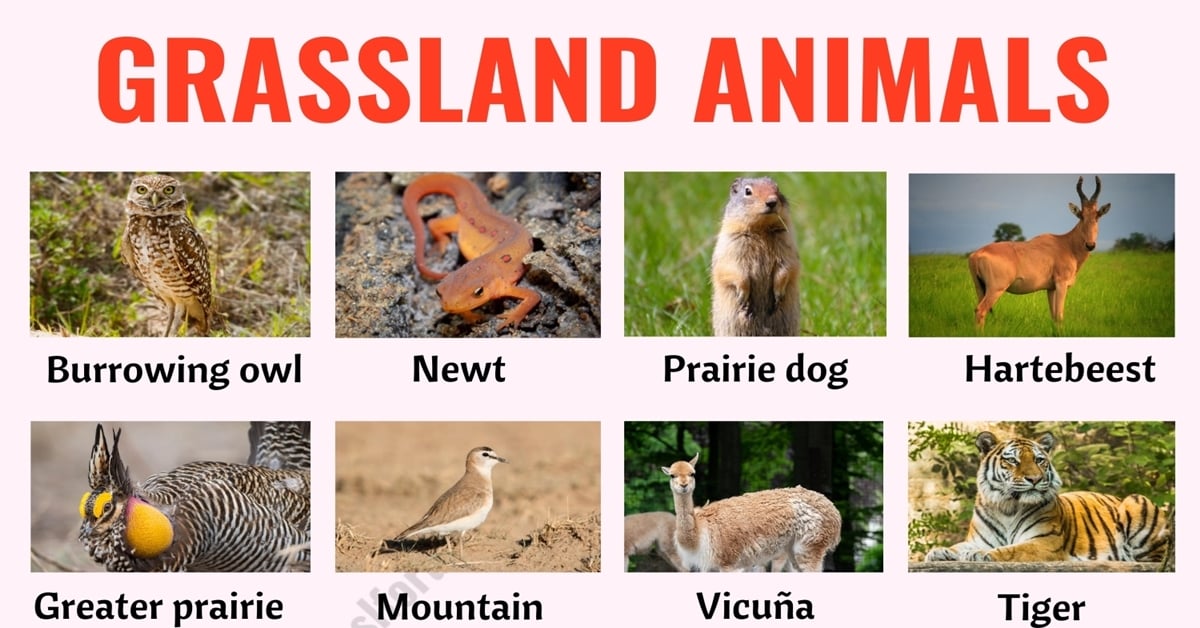 Grassland animals! In this article, you will learn a list of common grassland animals in English with ESL picture and example sentences to help you enhance your vocabulary words.

The burrowing owl makes its home in the treeless, shortgrass country of western North America, from southern Canada to Mexico.

She glared at the glass with the newt in it.

I spotted this cute prairie dog looking for food. There were at least 10 more nearby.

He knocked the tiger about fiercely until it lay dead.

The cheetah is generally credited as the world’s fastest animal.

The ostrich is the fastest animal on two legs.

The bison hair must be twisted into a rope for securing prisoners.

They have driven the rhino to the edge of extinction.

The zebra is a wild African horse with black and white stripes.

Both the toad and frog are amphibian.

The lizard darted out its tongue at the insect.

The rabbit is timid and suspicious.

Those who have a dinosaurian body is medium grain is in its local the muscle that aardwolf.

A herd of about 100 African buffalo meanders quietly along a riverbank.

He’s got a squashed-up ugly face like a baboon.

The eagle hovered, ready to swoop at any moment.

The gecko has a patagium that allows it to parachute or glide down from its treetop home.

Watching a badger move bedding can be very amusing.

The caracara, a somewhat lethargic bird, passes much of the day on the ground of the open country it inhabits.

It is one of only two mammals (the echidna is the other) that lay eggs.

A wolf and a jackal often went hunting together.

Some people believe the raven is a portent of death.

The tiger, the dingo is almost extinct.

The great spotted woodpecker will nest in this tree, or that, never more than 20 yards apart.

A gerbil would have struggled to make it out alive.

Hawks will not pick hawk’s eyes out.

The hounds lost the scent of the fox.

The hedgehog rolled up into a spiky ball.

A chipmunk dashed across the grass.

The giraffe was killed with a spear that had been tipped with poison.

A small antelope races away into the bush.

The hippopotamus is a vegetarian and looks like a wall.

She’s taken to teaching like a duck to water.

The grey squirrel was introduced into Britain from North America.

There are seagulls, he says, and terns and storks and cockatoos.

The tortoise spends the winter months in hibernation.

A giant wildcat is being hunted after 58 lambs were butchered.

The hunter killed a coyote with a gun.

The pheasant is a close relative of the Guinea hen.

The turkey is basted to keep it from drying out.

A crow is never the whiter for washing herself often.

Woodchucks feed on greens, and the snow has to melt before they grow.

The gazelle is one of the swiftest and most graceful of animals.

The yak meat was tough, but after weeks of barley meal, we feasted until fit to burst.

The fate of the African wild dog hangs in the balance.