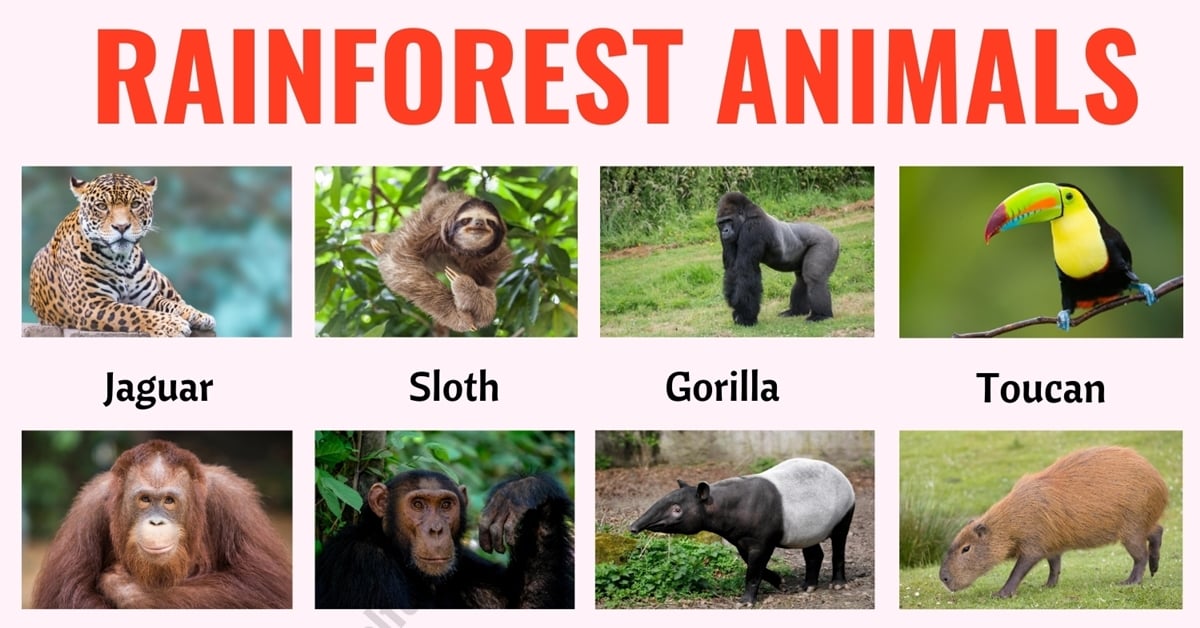 Rainforest Animals! In this lesson, you will learn a list of rainforest animals in English with ESL picture and example sentences to help you broaden your vocabulary words.

The mountain gorilla is on the verge of extinction.

In common with toucans, parrots and woodpeckers, cuckoos have two toes pointing forwards and two pointing back.

Squirrel monkeys, capybara, Gambian pouch rats, scorpions, Butterfly Peacock fish, a menagerie of parakeets, the list goes on, and on and on.

A young orangutan swings from tree to tree in Tanjung Putting National Park in Indonesian Borneo.

The spiny anteater is a mammal, although a very primitive one.

When Americans say wildcat, they usually mean a lynx, an ocelot or a bobcat.

But, like the giraffe, the okapi uses its long tongue to grab and eat leaves.

It is called the hoatzin.

A cassowary looks like a flamboyant ostrich and can be found wandering the rain forests of Australia and New Guinea.

Look how the mother chimpanzee cares for her young.

A scarlet macaw is caught munching a snack in Brazil’s Amazon rain forest. These birds are best known for their loud cackles, four-toed feet, and brilliant plumage.

The critically endangered golden lion tamarin is named for its striking orange mane.

The peccary that was most commonly traded is a species in decline and the woolly monkey is threatened with extinction.

The king vulture sat on its perch, naked head and neck.

The hyacinth macaw (Anodorhynchus hyacinthinus), or hyacinthine macaw, is a parrot native to central and eastern South America.

Intricate rings and dots mark the coat of a jaguar (Panthera onca).

A rhinoceros hornbill – one of 54 species of hornbills – perches on a fig tree in Gunung Palung National Park.

The crowned eagle, also known as the African crowned eagle or the crowned hawk-eagle is a large bird of prey found in sub-Saharan Africa; in Southern Africa, it is restricted to eastern areas.

The crested guan is a member of an ancient group of birds of the family Cracidae, which are related to the Australasian mound builders.