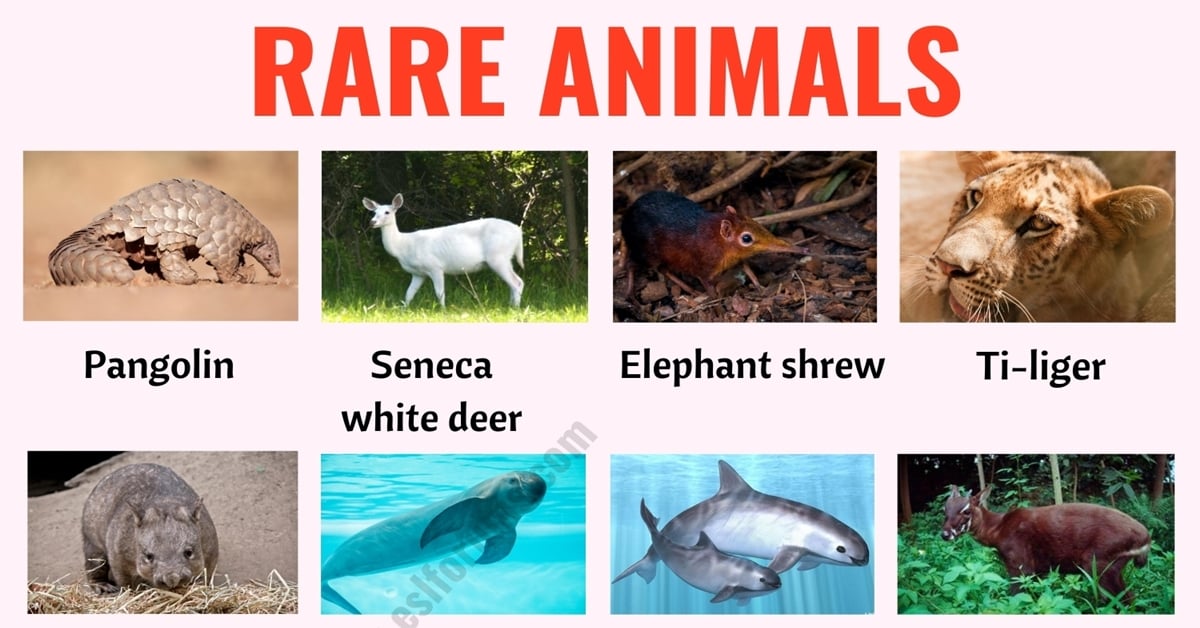 Rare Animals! In this article, you will learn a list of common rare animals in English with ESL picture and example sentences to help you enhance your vocabulary words.

Learn the names of rare animals in English with example sentences.

As dusk descends on the mountains, a pangolin emerges from its burrow.

The Seneca white deer are a rare herd of deer living within the confines of the former Seneca Army Depot in Seneca County, New York.

The black-and-rufous giant elephant shrew hid in his habitat and refused to come out for afternoon feeding.

Radar is a Ti-Liger (An Offspring of a female liger crossed with a male Tiger).

Laos Found the World’s Rare Saola (Pseudoryx nghetinhensis)At the end of August, a Saola was found in a remote area of Laos, which was the first sighting proven during the last ten years.

An unknown number of the vaquita, probably in the hundreds, had already been lost.

The northern hairy-nosed wombat or yaminon is one of three extant species of wombats.

The Amur leopard is a leopard subspecies native to the Primorye region of southeastern Russia and northern China.

Hector’s dolphins are the smallest and rarest marine dolphins in the world.

The Borneo elephant, also called the Borneo pygmy elephant, is a subspecies of Asian elephant that inhabits northeastern Borneo, in Indonesia and Malaysia.

The black-spotted cuscus is a species of marsupial in the family Phalangeridae.

The purple frog is a frog species belonging to the family Sooglossidae.

The hooded grebe is a medium-sized grebe found in the southern region of Argentina.

The Chile Darwin’s frog (Rhinoderma rufum), also called the northern Darwin’s frog, is one of only two members of the family Rhinotermitidae.

The Rondo dwarf galago (Paragalago rondoensis) or Rondo bushbaby is a species of primate in the family Galagidae.

The Colombian dwarf gecko was first discovered in 1964, however, it wasn’t seen again until recently when a new population was discovered more than 100km from its original location.

The white-winged flufftail is a very rare African bird in the family Sarothruridae.

The hirola, Hunter’s hartebeest or Hunter’s antelope, is a critically endangered antelope species found on the border between Kenya and Somalia.

The Cebu flowerpecker (Dicaeum quadricolor) is a small passerine bird.

The Mediterranean monk seal is a monk seal belonging to the family Phocidae.

The banded ground cuckoo is a species of cuckoo in the family Cuculidae.

The largetooth sawfish is a species of sawfish, family Pristidae.

The Chacoan peccary or tagua is the last extant species of the genus Catagonus; it is a peccary found in the Gran Chaco of Paraguay, Bolivia, and Argentina.

so sad 😢 he huans are killing heir home and nature.

YOU
Reply to  vikash